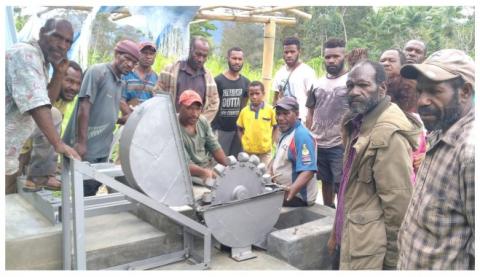 Papua New Guinea is known as the land of the unexpected and while there are often surprises, its natural beauty and richness in natural resources are well known to everyone. Despite the natural resources, PNG is facing the challenge of providing access to electricity to its rural population.

PNG has about 200 MW of installed hydropower capacity and there is a huge hydro power potential, currently estimated at 15,000 MW, which if developed, could significantly boost PNG’s energy production potential.

There are currently discussions about large scale hydro installations in the country. But at the village level, local champions are coming forward to harness the country’s wealth of resources thereby providing people with the necessity of a reliable, safe, clean and affordable source of electricity.

He has only a Grade 10 certificate and learnt his trade from a micro Hydropower Book he obtained from a source at the PNG University of Technology.  Known among villagers as the Hydro Man, Mr John Aino from Kenemba village in the Runumbe community in the Lower Asaro LLG has been installing  micro hydro systems in the last 14 years ago. Among his installations are the:

b) Micro hydro power scheme in the Kompri, Henganofi District

d) Currently installing a micro hydro power project in the Alandisero hamlet in Kasena No.1 village

Equipped only with his Hydropower Book, the “Hydro Man” collects the required materials from abandoned coffee factories and workshops in the area. He also fabricated the main hydro components. There were no detailed site measurements and no sophisticated formulas and calculations for his design and fabrication. The “Hydro Man” has no workshop but uses his house to work from. He only has basic equipment and tools for his hydro fabrications.

(Photo: The Hydro Man on the left at the small power-house)

“There are a number of passionate individuals such as the Hydro Man throughout PNG. They have a bit of basic training and needs support to upgrade their knowledge and skills. They also need business mentoring support to get their sustainable energy business established,” said Garaio Gafiye of Clean Energy Solutions in PNG.

The PCREEE Sustainable Energy Entrepreneurship Facility has been established to support new businesses in sustainable energy and is looking forward to supporting like-minded people such as the Hydro Man in 2022.