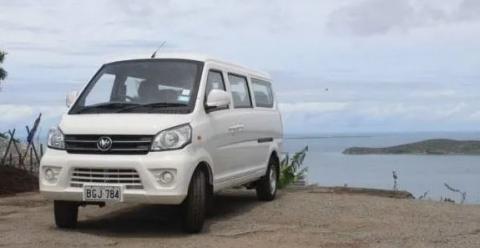 The three vehicles have passed test drives with flying colours. ‘We were really impressed,’ says Christian Lohberger, founder of clean energy company Astra Solar, which imported the Keyton cars in March under a partnership with Leasemasters PNG, local operator of the global Hertz car rental franchise.

‘We drove down Poreporena Freeway and up Dauga Drive at Touaguba Hill, one of the steepest roads in Port Moresby. There were no problems at all,’ he says.

In fact, the EVs were lighter, had no smells or toxic fumes and had better acceleration than petrol powered vehicles, he says. Even a road trial with the addition of 500-kilogram steel weights surprisingly didn’t impede performance.

‘It was actually harder moving all the weights in and out than it was to drive the car,’ jokes Lohberger. He says PNG drivers won’t want to return to petrol cars once they have tried an EV.

PNG is inching closer to the possibility of more EVs on the streets as they already look set to become the norm in places such as China and Europe by as early as 2030.

‘It’s just a more enjoyable experience,’ Lohberger says of driving an EV. One of the features of the EVs is regenerative braking, an energy-saving mechanism that allows the EV to use the wasted energy from the process of slowing down to top up its battery charge. ‘You can drive up Poreporena Freeway and use two per cent of your charge and then when you coast back down, using only gravity, you can recoup almost as much,’ Lohberger explains.

‘There are also security issues around storing diesel, with people trying to steal it. EVs eliminate all that.’

There is also the possibility, much further down the line, of bi-directional  charging, where the EV is used to power households, in the event of a blackout. Lohberger says: ‘An EV is basically a huge battery with wheels and a motor. So, we see a situation where someone with an EV drives to work in the morning and then plugs it into their power point so it charges up. They drive home at night and plug it into the house. If the power goes off, they switch to the EV and run from that, even the whole night, while still having enough to get back to work in the morning.’

Not only is this cleaner and more efficient, but the cost savings over time are also huge since oil-powered generators are expensive to run, especially with oil barrel prices now at record levels.

EVs are particularly useful for rural areas where only hydropower or solar is present and it’s difficult to bring truckloads of diesel in.

‘There are also security issues around storing diesel, with people trying to steal it. EVs eliminate all that,’ says Lohberger.

It is all very early days but with the government’s recent repeal of tariffs on EV imports to support the transition to a greener economy, PNG car dealers, many of whom represent brands that already have EVs in their line, may soon introduce them to markets.

He says the cargo vans may retail for under K100,000, which is comparable to a petrol vehicle of the same make and performance. The cost of a ‘full tank’ might also be under K50, for use over three to four days.

For now, though, with PNG just at the beginning of the transition to EVs, Astra Solar and Leasemasters PNG will import the cars to rent out to corporate clients, especially those with a sustainability focus and extensive delivery needs. ‘What we’ll do is lease the cars to them, initially for six months, and they will operate them in their fleet,’ Lohberger says.

‘We’ll install a battery charger at their compound or warehouse, and we’ll handle all the maintenance.’

The cost for this lease, which is inclusive of hire, maintenance, insurance and registration, might be K4000 per month, which, though 30 per cent more than for a similar petrol model, can be offset markedly in the savings in fuel and maintenance over the car’s lifetime.

END_OF_DOCUMENT_TOKEN_TO_BE_REPLACED

Invitation to Tender (ITT): Supply and installation of equipment for the rehabilitation of the Bambadinca mini-grid power plant in Guinea-Bissau