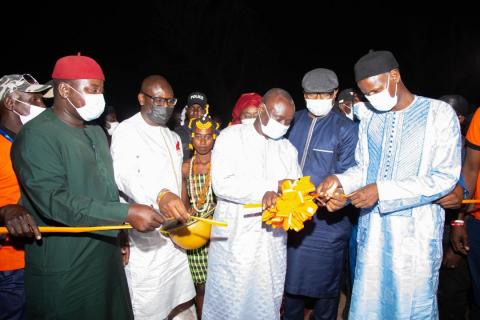 ECREEE - Praia, - 28th February 2022 - The ECOWAS Centre for Renewable Energy and Energy Efficiency (ECREEE) in collaboration with Unique Group of Companies has commissioned a Solar Mini-grid Plant in the Gambia on Friday 25th February 2022. The colorful ceremony was graced by cabinet ministers, Members of Parliament, senior government officials and scores of local dignitaries.

This is Gambia’s first-ever solar green mini-grid plant in the rural settlement of Nyamanarri in the Upper River Region with a beneficiary population of 6500 and in existence for over 145 years without electricity.   The 120-kilowatt Peak power Solar PV mini-grid was financed by Unique Energy and Unique Solutions through the Unique Group of Companies with part funding from the U.S Agency for International Development (USAID) through The ECOWAS Centre for Renewable Energy and Energy Efficiency (ECREEE). The Solar PV mini-grid also supported by government of the Gambia through the Ministry of Petroleum and Energy as well as GIEPA is set to provide 24 hours of electricity daily for over 200 households and businesses.

In his welcoming address, the Chairman and CEO of Unique Group Papa Yusupha Njie said Unique Energy received a co-funding grant award of $282,902 in November 2019 from ECREEE during its third annual ECOWAS Sustainable Energy Forum. Dilating on the significance of the project, CEO Njie said it will provide job and income generating opportunities for the youths of community thereby limiting illegal migration.

The Acting Executive Director of ECREEE, Bah F.M. Saho lauded the cordial partnership between ECREEE and the government of The Gambia. He further commended the Gambian leader for creating the enabling environment for effective participation of the private sector in the country’s economy. Mr. Saho said just about half of the ECOWAS population have access to electricity and thus stressed the need for more public and private sector partnership in diversifying the energy supply in the ECOWAS region, particularly in the rural and peri-urban areas, where only 8% have access to electricity mainly due to the difficulty in accessing the national electrical grids.

He stated that Decentralizing electrification is the most appropriate and cost-effective solution to the energy woes of rural communities. Commenting on the important strides made by ECREEE in creating an enabling environment for sustainable energy investments, Mr. Saho said in 2013, ECOWAS adopted the ECOWAS Renewable Energy Policy aimed at increasing the share of renewable energy in the region’s overall electricity mix by 35% in 2020 and 48% in 2030. The Acting Executive Director of ECREEE described the Nyamanarr project as a clear proof of concept for solar PV electrification and the viability of public private partnership while underscoring ECREEE’s commitment to the development of more similar projects in the Gambia and the rest of the ECOWAS region.

Mr. Saho paid tribute to the pioneer former Executive Director of ECREEE, Mr. Mahama Kappiah for his contributions to this historic occasion. He also commended the Project Manager Baboucarr Njie and the entire ECREEE staff as well as the CEO and Managing Director of UNIQUE Group of Companies, Mr. Papa Yusupha Njie for making this project a success.

In a statement read on his behalf by the Gambian Minister for Petroleum and Energy, His Excellency President Adama Barrow said the availability of reliable, efficient, affordable and environmentally friendly electricity supply is one of the cornerstones of Gambia government’s development aspiration for the energy sector. “Access to electricity is a prerequisite for the establishment of new businesses and the expansion of existing ones, providing the platform for employment creation, social development and economic growth” he added. The Gambian Leader stressed that his government is committed to promoting the deployment of both on-grid and off-grid renewables, by creating the necessary enabling environment to stimulate both public and private investments in the sector.

As part of the ceremony, The Unique Energy and group of Companies donated some materials to the school and are in the process of installing a WIFI zone for Nyamanarr Lower basic school. A 40-inch TV set with a satellite decoder has already been set-up in the school library.

END_OF_DOCUMENT_TOKEN_TO_BE_REPLACED

Invitation to Tender (ITT): Supply and installation of equipment for the rehabilitation of the Bambadinca mini-grid power plant in Guinea-Bissau