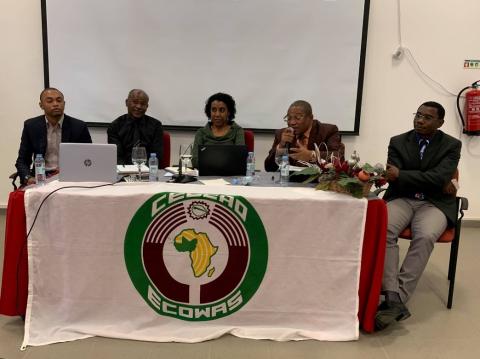 Praia, Cabo Verde - 30th May 2019 –   The Commissioner for Human Resources at the ECOWAS Commission, Professor Jeremias Dias Furtado has said that Africa needs strong leaders who should be determined to re-model the economic predicament being experienced in the continent.   Cape Verdean ECOWAS Commissioner for Human Resources, argued that the economic model imposed in Africa does not allow the desired development of the continent, suggesting a complete overhaul to reverse the situation.

He pointed out that Africa’s development problems have been identified for decades now and therefore stressed the need for strong leaders to translate into practice effective and efficient response to the demands of the population who could no longer wait for positive economic change.

Professor Jeremias Dias Furtado was speaking at a conference in Praia on the theme the challenges of political, economic and cultural integration in West Africa. The conference was organized by the School of Business and Governance of the University of Cape Verde in collaboration with the Master of African Regional Integration (MIRA), as part of activities marking Africa and ECOWAS week.

In what appears to be a candid and thought provoking statement, the HR Commissioner partly blamed the world market for most of the problems in Africa today. Professor Jeremias Dias Furtado noted that over the years, activities at the world market have resulted in imposing a model of development in the continent which as he put it "creates injustice" or "economy of underdevelopment".

He reminded participants that colonial powers granted political independence as a pretext only to design and develop a new strategy that would involve repositioning them at the economic level in Africa, through neo-colonialism.  Professor Furtado also spoke about the institutional and organizational reforms currently taking place at ECOWAS, as well as regulations, policies and procedures under his watchful eyes.

He said that Africa has made a "great leap" from the primary sector to the tertiary sector, while neglecting the secondary sector, which he described as the local productive transformation couple with the "lack of political will". Besides the political will, the Commissioner considered that African culture and peculiarity should be respected and that decisions should be based on science.

Based on the foregoing, Professor Jeremias Dias Furtado pointed out that Africa is currently experiencing triple losses ranging from what he called "unfair price" of raw materials imposed by the world market, as well as the "theft" of labour from African youth who could process this raw material locally, lack of political will, technology and innovation and the purchasing processed products (on the basis of African raw materials - eg. Chocolate made from cocoa, etc.) at high price.

Professor Jeremias Dias Furtado also cited the humanitarian drama in the Mediterranean where young African youths perished in search for greener pastures in Europe. The Commissioner said that this came as a result of gloomy picture in the African continent. This he said is unacceptable and therefore called for a complete turnaround of Africa’s economic paradigm in order to come up with a model that would transform our economies.

Professor Jeremias Dias Furtado suggested that one of the ways for Africa to pursue its development aspirations was for the continent to embark on what he called a "productive revolution" which will enable Africa stop exporting its raw materials to the world market and start producing locally.

The ECOWAS HR Commissioner said that Africa should start exploiting its potentials and stressed the need for the continent to develop its transport system air, sea and land, eliminate trade barriers, improve regulation and produce statistical data.

END_OF_DOCUMENT_TOKEN_TO_BE_REPLACED

Request for Proposals for Training of Trainers on Electric Vehicle Technology, Safety, Standards and Servicing