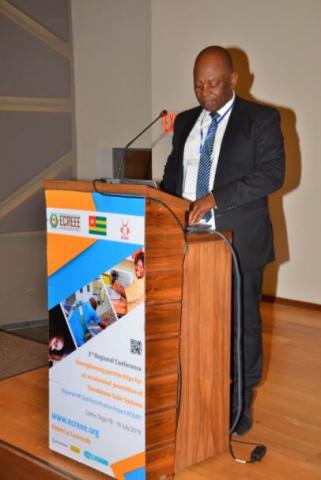 ECREEE – Lome, Togo 18th July 2019 – The Third Regional Off-Grid Electrification Project (ROGEP) has opened in the Togolese capital Lome. The theme of the convergence is ‘Strengthening Partnership for an Accelerated deployment of Standalone Solar Systems in West Africa and the Sahel’.  The conference marks the launch of the implementation phase of ROGEP, which was approved by the World Bank on April 17, 2019.  The two-day forum brings together a diverse group of stakeholders in the energy sector from 19 project countries mainly from ECOWAS member states and the Sahel.

The statement by the Togolese Minister of Energy and Mines Marc Ably Bidamon at the opening ceremony was delivered on his behalf by his director of Energy, Dr. Tchapo Akassewa Singo.  Minister Bidamon underscored the importance of energy security in member countries noting that provision of energy services will help to spur sustainable development, growth as well as job creation.  He therefore urged participants to take the conference seriously and come up with workable recommendations for effective implementation phase.

In her statement, the Resident Representative of the World Bank in Togo, Ms. Hawa Wague pointed out that access to electricity is central to any development program and that the World Bank is committed to partner with ECREEE to successfully implement the ROGEP project.  This she said will help to make a big change in the lives of ordinary citizens in the countries covered by the project.

Also speaking on the occasion, the special adviser to the President of West African Development Bank (BOAD), Christophe Agueggy informed participants that the ROGEP project will promote renewable energy in areas not covered by the national grid. Mr. Agueggy spoke about the importance of energy and the excellent partnership between BOAD, ECREEE and the World Bank, which he said will help to spur development in member countries.

Speaking earlier, the Executive Director of ECREEE, Mr. Mahama Kappiah reminded participants that the objective of ROGEP is to eradicate energy poverty through the development of a viable business ecosystem for the rapid deployment of standalone solar systems in the project countries. ECREEE boss disclosed that ROGEP also seeks to provide financial support to entrepreneurs in this line of business, and reduce risk to businesses that embark on these new technologies and business models.

Mr. Kappiah informed the meeting about some of the remarkable achievements of ROGEP since its landmark lunch in 2017 in Dakar, Senegal. Some of these included national stakeholder consultations in the project countries, two regional meetings during which common grounds for the implementation of the project were defined and adopted. He also said that in addition, a Market Assessment was conducted and regional standards for Solar Home Systems adopted by the ECOWAS Committee meetings held recently. Mr. Kappiah said that pilot projects are already underway in Niger and Nigeria to assess the potential of providing energy services to public institutions such as schools and hospitals.

The Executive Director thanked the World Bank and Clean Technology Fund for financing the initiative, which he said will help to address energy access deficit in the project countries. The project he said, will offer support to governments, standard bodies, the private sector, commercial and financial institutions and end users along the value chain to make this project a success. In what appears to be a frank and convincing statement Mr. Kappiah also informed development partners that ECREEE has the capacity and the team to take on more of such projects and therefore appealed for partnership to improve access to energy services in the ECOWAS region and the Sahel.

It would be recalled that ROGEP was launched to focus on supporting and developing viable business ecosystems in the project countries through a regional-level initiative. In a bid to develop a regional market, the project will identify policy barriers affecting the growth of the stand-alone solar market.  It will also create awareness within the government policymakers on the benefit of removing such policy barriers, as well as provide targeted support for barrier removal in challenging markets.   The project will also help the countries adopt the Common External Tariff (CET) to facilitate cross-border trade of stand-alone solar products.  It will also develop regional standards on quality assurance (QA) framework of stand-alone solar products to facilitate supply of eligible products across the 19 project countries.

The project will endeavor to build human capital by providing training to develop adequate and required skills through a structured entrepreneurship development facility, which will ensure reliable service to the beneficiaries and will create employment opportunities at the local level.  It will provide access to finance to solar companies and to beneficiaries in this new line of business, and provide financial support to entrepreneurs; and reduce risk of promoting new technologies and business models.

The ultimate project beneficiaries will be the people currently living without access to electricity connection or living with unreliable electricity supply within the 19 ROGEP countries and the project has an ambitious target of providing electricity services to about 1.7 million people of which about half would be female.

For additional information about the event, please click here.

BASE announces call for applications for the CaaS Incubator