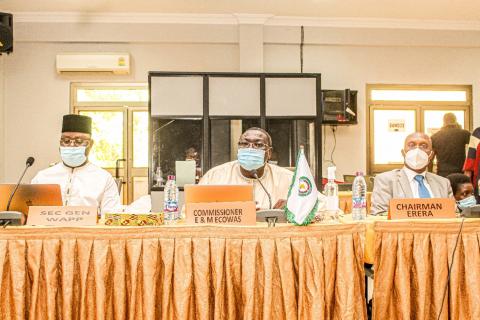 The seventh coordination meeting of ECOWAS specialized institutions and agencies in charge of energy, ended in Accra on 21st May 2021 with pertinent recommendations and decisions towards achieving energy security in West Africa. The Accra meeting was presided over by the ECOWAS Commissioner for Energy and Mines, Mr. Sédiko Douka.

The first phase of the regional power market was launched in June 2018 in Cotonou, Benin Republic as a transitional phase meant to last for a maximum of two years before the introduction of the second phase to be characterized by a day-ahead, competitive market, which will help to promote efficiency. The second phase is considered by the stakeholders as the real operationalization of the regional market.

Participants also stressed the need for the completion of the construction of the WAPP-ICC (Information and Coordination Centre of the West African Power Pool) based in Calavi in the Republic of Benin. The ICC will serve as the Systems Operator and Market Operator (SMO) of the Regional Electricity Market.

Similarly, participants recommended a continued implementation of priority projects of the ECOWAS Energy Master Plan for the development of regional means of production and transmission of electricity for 2019-2033.

They also want the implementation of renewable energy physical infrastructure projects in Member States prioritized (solar and wind), particularly the initiative of the West African renewable energy corridor which aims to generate additional power of 2,000 megawatts by 2030.

In this regard, ECREEE has been requested to develop solar and wind farm projects in terms of preparation, resource mobilization and implementation in collaboration with key stakeholders including Member States, donors, and the private sector.

Participants also considered issues relating to gas supply and payment guarantees, requested the West African Gas Pipeline Authority to pursue the necessary actions to clear all the outstanding debts owed to the Authority by some pipeline stakeholders.

Furthermore, the meeting solicited the assistance of the Department of Energy and Mines of the ECOWAS Commission to help resolve issues relating to payment of arrears and potential litigations created during the implementation of the ECOWAS Emergency Electricity Supply Program (EEESP).

Speaking at the closing ceremony Commissioner Sédiko Douka, thanked all the participants for their contributions and for the cordial atmosphere during the sessions. He welcomed the synergy of actions that was established between all the ECOWAS institutions and agencies in charge of energy as noted in the presentations that were made.

He urged all stakeholders to maintain this level of collaboration to ensure the efficient implementation of required activities in the energy sector.

Heads of institutions and agencies who led their delegations to the meeting included the Chairman of ERERA, Professor Honoré Bogler, the Secretary General of the West African Power Pool, Mr. Apollinaire Siengui Ki, the Acting Executive Director of the ECOWAS Centre for Renewable Energy and Energy Efficiency, Mr. Bah Saho and the Director General of the West African Gas Pipeline Authority, Mr. Debo-K’Mba Barandao.

Others in attendance at the meeting included the Director of Energy and Mines of the ECOWAS Commission, Mr. Bayaornibe Dabire and the Director of Environment, Security, External Relations of the West African Gas Pipeline Authority, Mr. KodjoPedassou, Mr. Abdulkadir Nazif, Director of WAPP-ICC and two members of ERERA’s Regulatory Council, Dr HaliruDikko and Mr. Aly Mar Ndiaye.