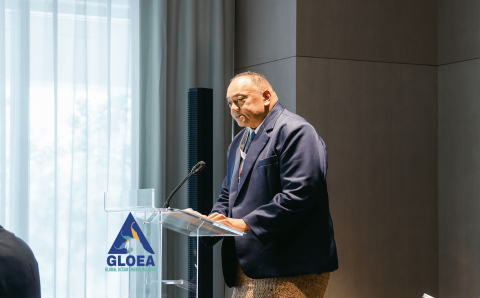 08 July 2022, United Nations Headquarters, New York, U.S.A.: “Both the talking and the buck stops here, today, on 29th June 2022, in Lisbon, Portugal.” Those were the resounding words from Honourable Mr. Siaosi ‘Ofakivahafolau Sovaleni (Hon. Huʻakavameiliku), Prime Minister of the Kingdom of Tonga and President of the Sixth Session of the SIDS DOCK Assembly, as he launched the Global Ocean Energy Alliance (GLOEA), the ocean energy partnership that facilitated the historic signing of an agreement to develop an ocean energy power purchase agreement (PPA) with the United Kingdom-based Global OTEC, for the world’s first Floating Ocean Thermal Energy Conversion (OTEC) Platform called, “Dominique,” a 1.5 megawatt (MW) pilot facility to be developed and deployed in Sao Tome and Principe by 2024.

Standing shoulder to shoulder with the Prime Minister of the Democratic Republic of São Tomé and Príncipe, Honourable Dr. Jorge Bom Jesus, Hon. Huʻakavameiliku addressed a packed room of fellow leaders, high level officials and distinguished guests attending the SIDS DOCK Side Event on the launch of the GLOEA on 29th June 2022, at the Eurostars Universal Lisboa Hotel, Lisbon, Portugal, on the margins of the 2022 United Nations Ocean Conference, held from 27 June to 1 July 2022. He was emphatic in declaring to the meeting and to Conference participants that small islands and coastal nations see ocean energy as the only path that can give the future population a fighting chance to survive and thrive, and commended the Prime Minister of São Tomé and Príncipe for taking the first step in realizing the vision of a strategy to survive and thrive, and that is ocean energy for climate resilience. “As leaders, we cannot pass off sinking countries with crumbling infrastructure severely damaged by ferocious natural disasters, and we cannot pass off countries with the highest oil prices and the worst debt situations in the world to our next generation,” he said.

The GLOEA is the most important sustainable energy and climate resilience initiative created by Small Island Developing States (SIDS), coastal nations, Least Developing Countries (LDCs), since the idea for a SIDS DOCK. Hon. Huʻakavameiliku said that the launch of the GLOEA proves that SIDS have taken the leap and the lead in advancing the commercialization of ocean energy technologies that are SIDS-Appropriate.

The GLOEA has four (4) main goals: to facilitate full commercialization of a broad range of ocean energy technologies with demonstration projects; to raise financing for the first Floating Ocean Thermal Energy Conversion (OTEC) Platform in the Democratic Republic of São Tomé and Príncipe, as an example for SIDS and LDCs; to Provide knowledge and data management, capacity building, policy and planning support for Governments, ocean energy industry and financiers, and; to Establish a regional network of ocean energy expertise through the United Nations Industrial Development Organization’s Global Network of Sustainable Energy Centers (UNIDO’s GN-SEC), SIDS DOCK in SIDS, and coastal LDCs.

The Memorandum of Understanding (MoU) to develop a Power Purchase Agreement (PPA) for Global OTEC to sell power to the local utility, EMAE (State-Owned Water and Power Supply Company), was signed by the Hon. Osvaldo C.V. Abreu, Minister of Public Works, Infrastructure, Natural Resources and Environment on behalf of the Government of São Tomé and Príncipe, Mr. Daniel Grech, Chief Executive Officer, Global OTEC, and His Excellency Mr. Vaʻinga Tōnē, Ambassador and Permanent Representative of the Kingdom of Tonga to the UN and Chair of the SIDS DOCK Executive Council, on behalf of SIDS DOCK.

During the Side Event, SIDS DOCK and the Washington, D.C.-based Climate Institute, also signed a MoU to provide the general framework for cooperation between SIDS DOCK and the Climate Institute to promote the establishment of the GLOEA, and help accelerate the development and deployment of ocean-based renewable energy technologies in SIDS coastal nations and LDCs. Mr. Nasir Khattak, Chief Operating Officer and Member of the Board, in signing the agreement, announced that the Climate Institute will act as the Interim Secretariat for the GLOEA, as the partners intend to pursue a target of $40 million to support start up activities and project investment support. His Excellency Mr. Vaʻinga Tōnē, Ambassador and Permanent Representative of the Kingdom of Tonga to the UN and Chair of the SIDS DOCK Executive Council, signed the MoU on behalf of SIDS DOCK.

The SIDS DOCK Side Event was chaired by His Excellency Mr. Ronald Jumeau, Ambassador and former Permanent Representative of the Republic of Seychelles to the UN, former Chair of the SIDS DOCK Executive Council and SIDS DOCK Roving Ambassador for Climate Change and the Ocean, and organized by the Secretariat of SIDS DOCK, the United Nations Industrial Development Organization (UNIDO) and the Stimson Center Alliance for a Climate Resilient Earth (ACRE), in partnership with the Governments of the Kingdom of Tonga, Belize, the Republic of Seychelles, and the Democratic Republic of São Tomé and Príncipe, with the kind and generous support of the Governments of Austria and Norway.

Request for Expression of Interest: Development of Energy Storage Codes and Standards for SADC Region

END_OF_DOCUMENT_TOKEN_TO_BE_REPLACED

Recruitment of a certification assistant