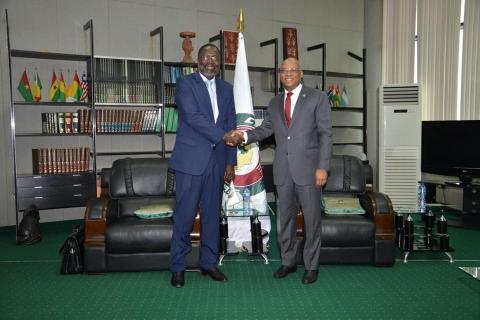 Dr. Omar Alieu Touray, a Gambian National, has assumed office as the new President of the ECOWAS Commission for a four-year tenure. He takes over from Jean-Claude Kassi Brou, an Ivorian National, who has piloted the affairs of the Commission from 2018 till date.

At an event held at the Main Auditorium of the ECOWAS Commission Headquarters, the new President H.E Dr. Omar Alieu Touray expressed his appreciation to the President and the Government of the Republic of The Gambia for proposing his candidature and the Heads of State and Government of the Community for the unanimous endorsement and confirmation of his appointment.

He also thanked the outgoing President of the Commission, H.E Dr. Jean-Claude Kassi Brou and his team for their stewardship over the past four and a half years. While enumerating the numerous security and economic challenges occasioned by the COVID-19, he promised to tackle these challenges head-on and deliver on his mandate. He enjoined Member states to ensure full payment of their community levies and the full implementation of ECOWAS protocols.

Paying special tribute to the Government and people of the Federal Republic of Nigeria, he thanked His Excellency Ambassador Dada, Minister for State for Foreign Affairs and President Buhari for being generous host to the Commission and other institutions of ECOWAS and taking the lead in peacebuilding and integration efforts.

In his remarks earlier, the outgoing President H. E Jean-Claude Kassi Brou thanked the President of the Federal Republic of Nigeria, H. E Muhammadu Buhari for his unflinching support to ECOWAS Institutions and welcomed warmly Dr. Omar Alieu Touray and all incoming statutory appointees for their nomination as leaders of ECOWAS Institutions for the 2022-2026 period.

He used the opportunity of the handing over ceremony to highlight the achievements of the 2018-2022 management particularly in the areas of promoting of security, peacebuilding and combating COVID-19 pandemic. He praised Member States for their resolute efforts and courageous stand to confront terrorism and banditry in the region which resulted in the development of the action plan.

He also stated that on the political front, the deepening of democratic culture was improved upon with eleven countries peacefully conducting presidential and legislative elections during his tenure. He said the free movement of persons and goods was strengthened through the adoption of ECOWAS Biometric Identity Card which is being implemented in five countries while listing progress made in agricultural production systems and regional infrastructure development.

He commended all staff of all ECOWAS Institutions for their hard work and dedication during his tenure and encouraged them to extend same to the incoming management and thanked Partners both bilateral and multilateral for their support and assistance.

In his address, H.E. Amb. Zubairu Dada, Minister for State for Foreign Affairs of the Federal Republic of Nigeria commended the outgoing management led by H.E. Jean-Claude Kassi Brou for the wonderful achievements recorded in the Region during their tenure. He congratulated the new President H.E. Omar Alieu Touray and other statutory appointees and assured them of Nigeria’s support.

Request for Expression of Interest: Development of Energy Storage Codes and Standards for SADC Region

END_OF_DOCUMENT_TOKEN_TO_BE_REPLACED

Recruitment of a certification assistant